Date:    15/01/17
River:    Hurunui River, North Canterbury, NZ
River Conditions:   42 Cumecs at Mandamus. Grade 2, water clear.
Weather Conditions:  Hot with strong gusty nor-westerly winds.
Number on Trip:    Initially 16 kayakers but only 7 paddling this section.
Time on River:  2 hours.
Comments:  This was planned as a beginner friendly trip to the Waiau but with the Met Service predicting heavy rain around the main divide (which didn’t seem to eventuate) and strong nor-westerly winds (which certainly did eventuate), Graeme decided that the Hurunui would be more sheltered and was a better option. So Sunday morning saw 16 gallant paddlers headed to out to the Hurunui. The forecast was sunny, warm with strong nor-westers. After checking on Devil’s Fang Falls we all headed up to the Jollie Brook put in to decide what to do as it was pretty windy. From there some of the group decided to go somewhere less windy, Ian took his group down to Seawards to paddle Maori Gully and those left with Graeme decided to paddle down to South Branch and get out there, thinking this section should be more sheltered. 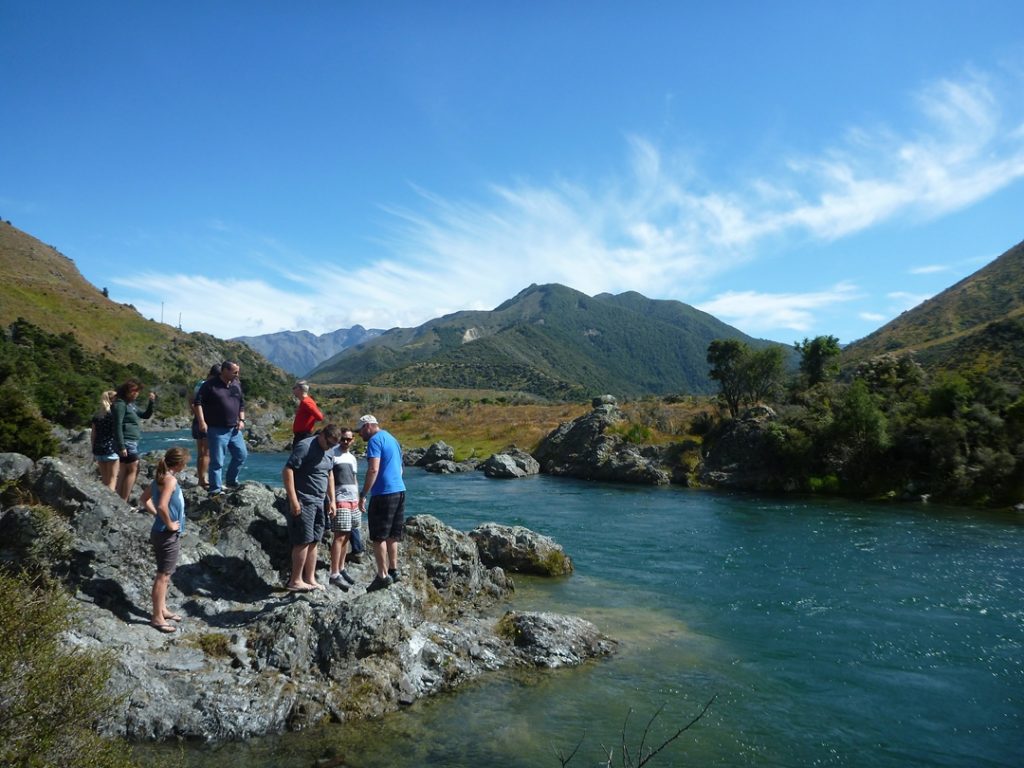 Decisions at Jollie Brook. To paddle or not to paddle, that is the question?

So seven of us put in at Jollie Brook, while the rest headed off, taking our vehicles down to South Branch so we didn’t have to run a shuttle. We were accompanied by the clubs new double kayak, a Jackson Dynamic Duo, it was a good looking boat and certainly an improvement on the old Topo Duo which had gotten well past its safe use by date. The couple paddling it decided to try a roll before we got underway and asked if I could rescue them if it didn’t work. The first part went well but they couldn’t quite get it upright and when I tried to help pull it up, I couldn’t reach far enough over to get a grip without dislocating my rib again and a swim resulted.

Once we got underway, the wind, while strong and gusty, wasn’t too bad and we had an enjoyable paddle down the initial boulder garden section. I tried to surf and catch eddies but most of the others were just happy to get down the river so I had to make sure I didn’t get left too far behind. 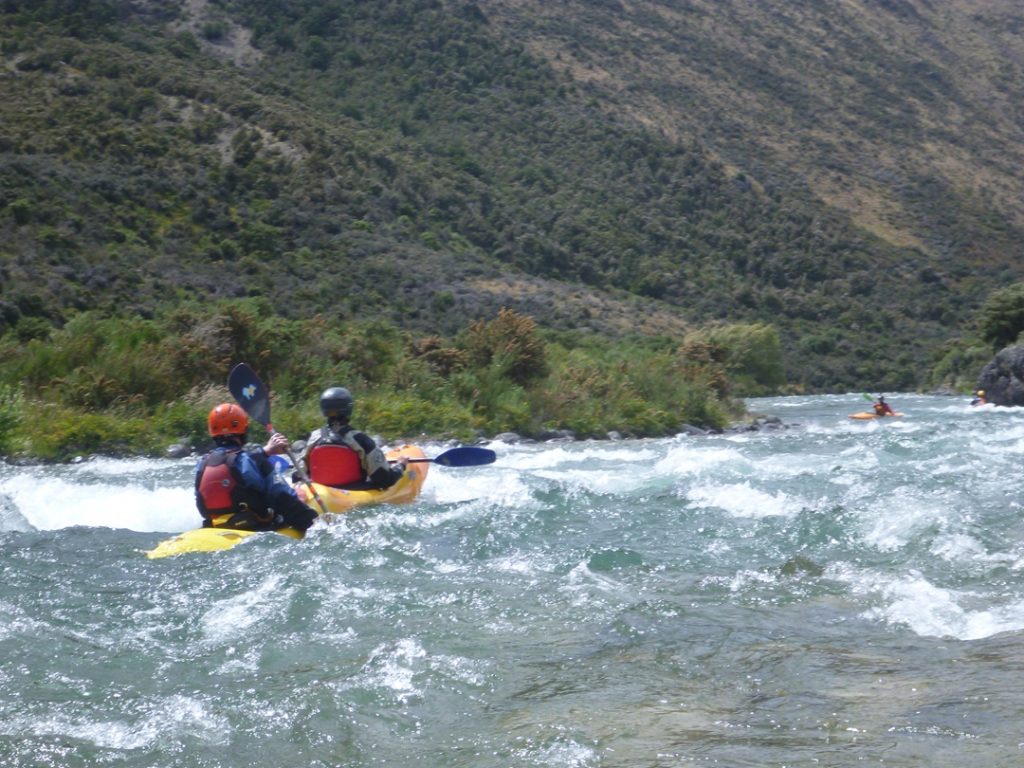 The Dynamic Duo line up on an early rapid, heading towards the first play spot.

At the first usual play spot, there weren’t any takers on the eddies or the surf wave so I demonstrated the accidental nose stand and pirouette as my nose caught while surfing and I narrowly avoided the bluff. It was an impressive move for me but the look on my face conveyed that it wasn’t deliberate. As we carried on down, people got a bit bolder and were happy to practice rolls and breaking out of eddies. 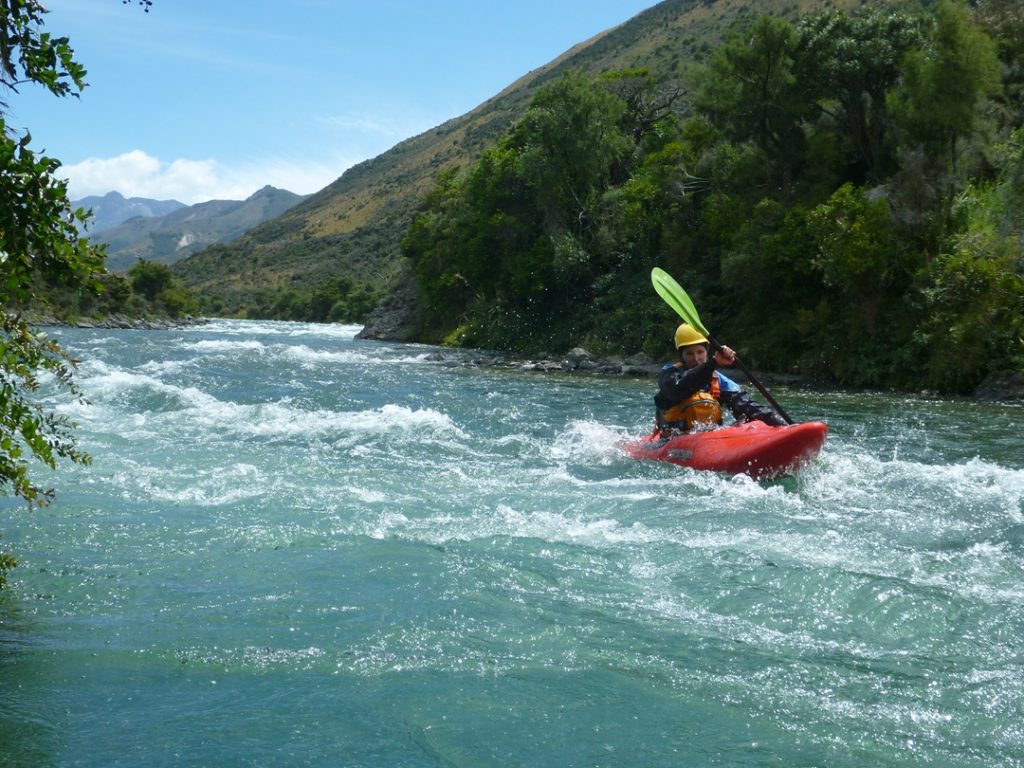 A beautiful sunny day to be on the river.

In the gorges, we were fairly protected from the wind but it still made its presence felt at times and paddling upstream to catch waves etc, got very hard.

At South Branch, some of the group got out to move the vehicles to Dozy Stream while the rest continued on down. From South Branch, the valley opens out considerably and the river gets very exposed. In one flat section, the wind started to really hammer us, I was leaning into it to try and stay upright when an extra strong gust hit us and blew myself and the paddler next to me completely over. We both rolled up again so quickly that it seemed to the kayaker behind us, that this was a deliberately coordinated move. After that, I kept my paddle low and concentrated on bucking the wind and staying upright, the other guys weren’t so lucky and were blown over again. This section definitely wasn’t much fun and we kept moving at brisk pace. 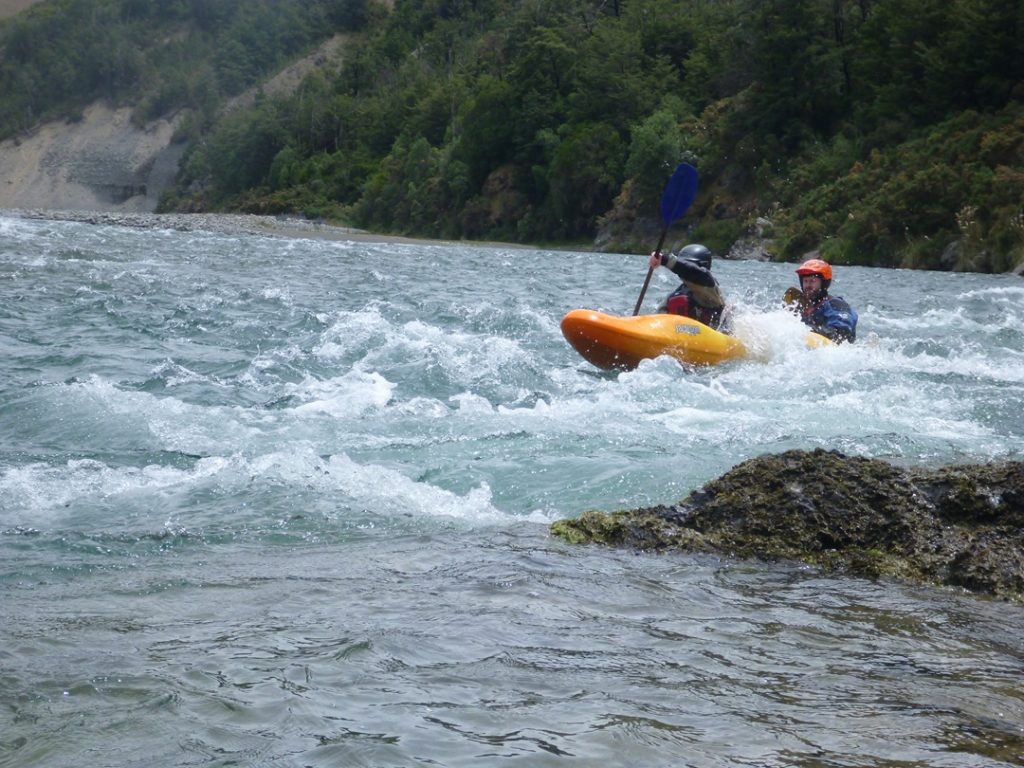 The Dynamic Duo runs a rapid.

We halted well before Devil’s Fang Falls and discussed what we intended to do. The Dynamic Duo was happy to lead and Lukasz decided to get out above the rapid. The other solo kayaker and myself eddied out midway down the lead in and waited for the wind to abate. At that point the wind strength had increased considerably and the blown spray stung your face and eyes. After huddling in the eddy for what seemed like quite a while, I decided to go in a “slightly” calmer patch and broke out. I think I took the same line as the pre-Christmas run, sliding down the tongue with a good brace on the right hand side and then pulled into the eddy below the falls to provide additional safety to the next kayaker (and try and capture the moment amidst all the wind blown spray). He had no problems, despite disappearing almost completely in the form and then bursting forth in spectacular style. He pulled in beside me and then we both broke out and paddled down to the get out, no one was keen to play. 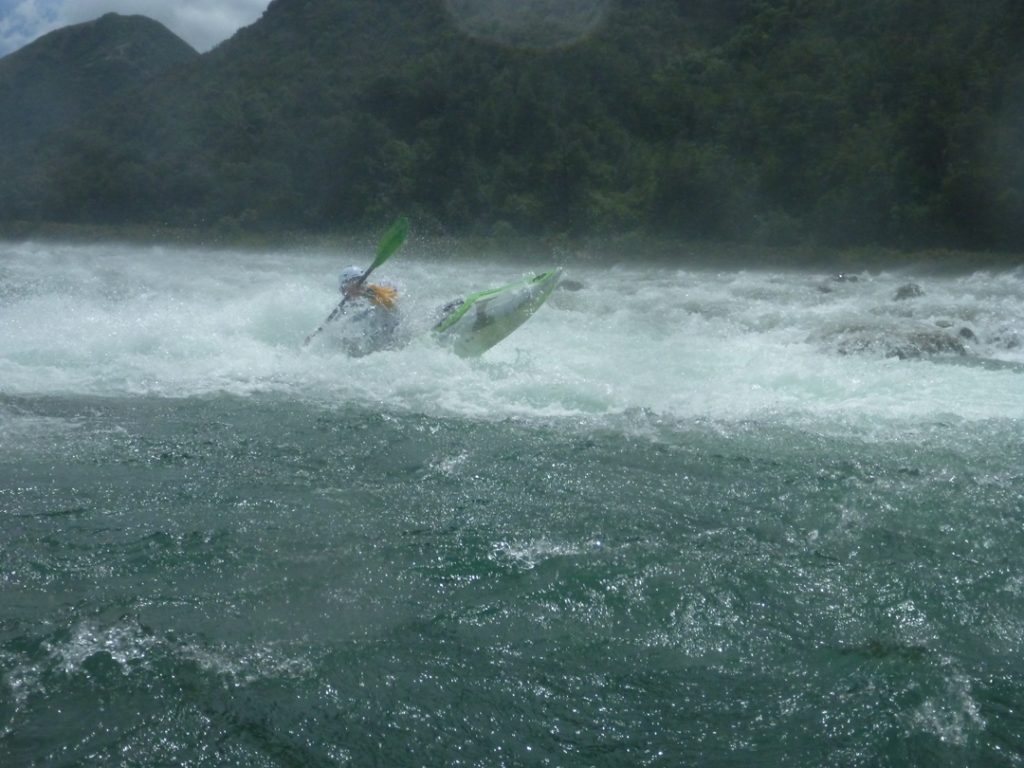 Wind blown spray obscures a kayaker as he re-emerges from the bottom of Devil’s Fang Falls.

After that, we were all glad to get changed, load up the boats and head back to town. We didn’t see any sign of the others at Maori Gully, so we guess they didn’t hang around either. It was a fun day out and nice to be on the river and see Graeme out again, but it was pretty darn windy.