Date:    6/12/14
River:    Hurunui River, North Canterbury, NZ
River Conditions:   57 Cumecs at Mandamus. Grade 2+(3), water clear.
Weather Conditions:   Cool, strong gusty NW winds. Sunny at first, then overcast.
Number on Trip:    11 (6 doing Maori Gully) kayakers.
Time on River:  4.5 hours.
Comments:   With change of plans over the WWCC Christmas trip, Robin volunteered to run a Hurunui trip on Saturday as the weather looked better then. I was running late when I arrived at the Peg but managed to get my gear in one vehicle, while my boat and six others were stacked on Robin’s ultra wide roof racks and then we were off. We had a brief stop at a bakery in Amberley for supplies to sustain us on or journey and then headed for the put in at Jollie Brook.

Just past Seawards,  a couple of paddlers drive the opposite direction waved us down for a chat. It turned out that some one had forgotten their spray deck and wanted to borrow a spare. We carried on up to Jollie Brook, pausing on the way to check out Devil’s Fang Falls, the right hand line looked good with the “fang” concealed under the flow. After some discussion at the put in, the group decided to run the top gorge as well as working out a cunning shuttle plan with another group that meant we didn’t have to run a double shuttle but wouldn’t have any dry gear at the take out.

At the Sister’s Stream, we got changed and then crossed the bridge, walked over the hill and down the river. It was pretty hot and I was glad I kept my dry jacket off until I reached the river, and chose to tow my kayak rather than carry it down the hill.

Practicing your moves to warm up

Once the rest of the group arrive and we got on the water, there was a bit of a warm up before we allowed the swift current to carry us down to the Top Gorge. Since we tend not to run the Top Gorge very often, a few of paddlers hadn’t ever run it before and there were the odd nervous expressions as the river narrowed and the surrounding cliffs rose up.

Heading towards the Top Gorge

Matt provided the lines for Em, one of the newer paddlers, to follow and I kept an eye on the tail end of the group. At this flow, the gorge was quite nice with some good rapids but no dramas as we passed swiftly through it. The banks opened out and we worked our way down the boulder gardens above Jollie Brook, catching eddy’s and surfing holes.

Down past the Jollie Brook put in and on to the South Branch confluence, where we stopped for a brief break and a bite to eat. The weather slowly changed as the sky grew grey and the wind strengthened. As the drew near to Devil’s Fang Falls, everyone took they previously decided course of action. Some paddled down the left channel and then walked around the drop, while others ran it. I pulled into an eddy at the top of the rapid and waited until the way was clear and then proceeded down the usual right hand line. Above the drop was kind of messy, but there was a clear line and I followed that down, clipping a submerged rock on the way. At the bottom, I caught the seam, wobbled, braced the broke into the eddy to wait with my camera at the ready for Matt to follow me down.

I waited and waited and waited, no one came. I’d watched Em and Matt pull into an eddy on the right hand side and then disappear, odd I thought, until they reappeared on the bank above the rapid, scoping it out. They disappeared again, more waiting until their boats reappeared heading towards the drop with Matt in the lead. As they reached the top, I press the button and began shooting in burst mode only to run out of shots as Matt reached the bottom of the tongue. Em, following closely, ran the drop and hit the foam at the bottom and flipped. My camera disappeared and I broke out of my eddy, just in time to watch a very happy Em roll back upright, having made her first descent of Devil’s Fang Falls. 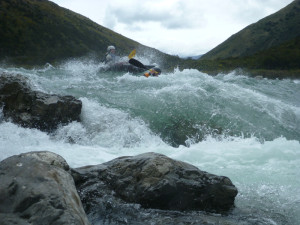 After Devil’s Fang Falls, we regrouped, those that portaged getting back into their boats, while others elatedly rejoiced, having successfully pushed personal boundaries and triumphed. From here on the pace quicken as all were feeling a bit tired, and the strong wind gusts and cold were getting a bit draining. We soon arrived at Seawards and there was a discussion on whether to run the Gully, as Robin, our trip leader, was feeling distinctly chilled in his short sleeved dry top. Six of of decided to continue, with it being the first time for Nick & Sophie, who had recently arrived in Canterbury.

With the strong wind gusts blasting us and the swift flow, there wasn’t much impetus for playing so Matt would generally lead, while I followed up behind to make sure all was well. There was no dramas but I ended up tipping on the final grade 3 rapid at the corner, my first roll got me some air as I bounced up and down the wave train, before righting myself on the second try as I neared the bluff at the end of the rapid. Everyone was pretty worn out by the time we reached the take out and staggered up the hill, but all seemed to have enjoyed the trip, especially those doing it for the first time. There was a bit of a wait for the vehicles and our dry gear to arrive and then it was back to Christchurch, only stopping for an ice cream in Amberley to round off the day.